This appeared outside my building a couple of days ago (click to enlarge): 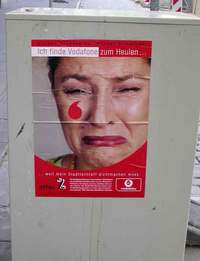 This woman is crying because her local community meeting place (whatever that is) has closed down, and all because Vodaphone is trying to reduce its tax bill.

And this appeared round the corner: 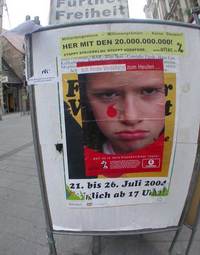 It’s raining into this poor child’s classroom. No wonder the Germans are worried about school results.

Here’s the source of the campaign (in German), with other materials for the campaign. Of course, 20 billion is a lot of euros, but I thought companies had a duty to try to reduce their outgoings. I’m also not clear about the direct effect on schools and local community projects funded by the city. I suppose if Vodaphone collapsed and jobs were lost they would complain too. And I wish it was raining here so I could concentrate on my work!