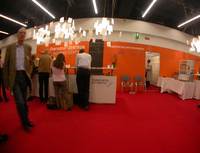 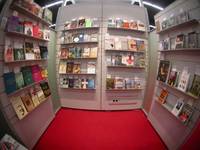 The photos show the translators’ area at the Frankfurt Book Fair. The words in chalk announce that Elfriede Jelinek has been given the Nobel Prize for Literature. The books all show the names of the translators, on cards. The translators’ area also has a space with chairs for presentations to an audience, and it’s beside a coffee station, so it looks suitably large and professional.

Some observations on Jelinek: she has recently translated and adapted, together with Karin Rausch, ‘The Importance of Being Earnest’ (‘Ernst ist das Leben (Bunbury)’) and is working on ‘An Ideal Husband’. She has also translated Feydeau and co-translated Pynchon (list of works).

As I was in Frankfurt all day, I missed interviews and discussion on TV except for about ten minutes. The anger and narrowmindedness of some Austrians when confronted with something they don’t like is astonishing and may be untranslatable. It reminds me of the Nurembergers standing in front of the rabbit sculpture that commemorates, with irony, Dürer’s hare. It used to be fun to stand there and hear the complaints. But I haven’t heard this amount of personal affront in Franconia when it comes to literature.

I didn’t realize how much autobiographical content went into ‘The Piano Teacher’ (‘Die Klavierspielerin’). According to the German biography on Wikipedia, she was sent to a convent school, and from the age of 13 she studied organ, piano and recorder at the Vienna Conservatory (having previously had piano, guitar, flute, violin and viola lessons) and at the same time attended a normal grammar school (Gymnasium). She married in 1974, and I presume the novel is based on the idea of what might have been if she had continued her mother’s plan.

Jelinek was born in Mürzzuschlag: I remember a translator once asking on a mailing list how to translate it (Zuschlag is a translatable German word, but Mürzzuschlag isn’t).