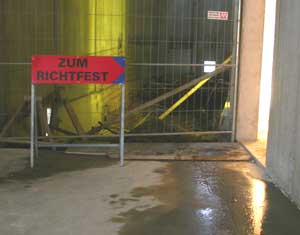 Last week I was invited to the topping-out ceremony (Richtfest) of the multi-storey car park they’ve been building opposite my office since January.

But then we were told it wasn’t a real Richtfest. As some translators know (and others don’t), there is a sequence of building trades (Gewerke) in a building project.

For instance, the sequence might be (in part): piling, drainage and sewage, masonry, roofing, plastering, rainwater plumbing. gast and water mains, painting and decoration.
Trades in English here, in German here.

For a Richtfest to take place, the carpenters have to come in and make a timbered roof. There are no wooden beams in the car park, so no tree on top. 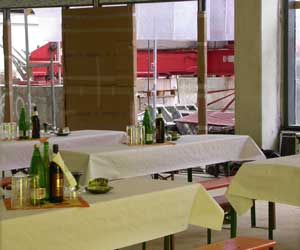 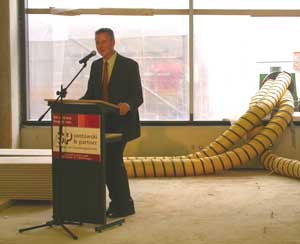 This picture does not show the beer, which was in large quantities elsewhere. And I didn’t stay for the food, as I was working.
The speaker is Thomas Jung, the Oberbürgermeister of Fürth, whom some would apparently translate as Lord Mayor (there was a recent discussion on pt of how to translate Oberbürgermeisterin without making her sound like a mayor’s wife). Someone said Senior Mayor for Oberbürgermeister (there is a Bürgermeister too).