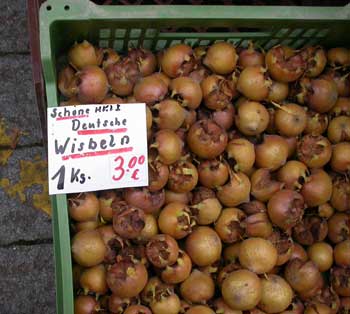 And here is December 7th: 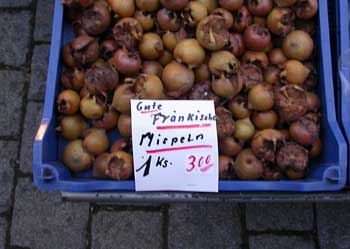 I hadn’t said anything about the term, and I don’t think they read my weblog, but I mentioned the change and got the rather sheepish information that they had decided to turn the W upside down and that Wisbeln was indeed not a Franconian term.

Some of the medlars had already bletted, a term discussed in the comments to my last entry and also at Uncle Jazzbeau’s Gallimaufrey and at Giornale Nuovo; in the comments to the latter are links to crude wordplay in ‘Romeo and Juliet’. And yes, they do look like rose-hips in shape. Uncle Jazzbeau also has a link to an entry on persimmons by Laura Limay, saying that one type of persimmon has to blet.

I have now tasted them. The peel can’t be eaten, nor can the 4 or 5 hard stones in each. The brown pulp tastes like a cross between baked apple and bread pudding – not very sour, not very sweet, but apple-like.

The question now is: do they go off? The novel quoted at Gionale Nuovo suggests an effort was made to keep them in the right state of rottenness over winter. 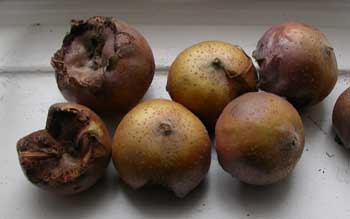 Sorry about the poor focus: bletted on the left, unready on the right, and on the far right a stone, which can be opened only with nutcrackers or a hammer. 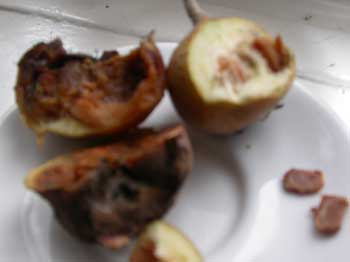