Some links at the end.
Exhibition at the Germanisches Nationalmuseum.
Perhaps more interesting for me than for Germans.
I think they put this exhibition together by getting a group of experts to brainstorm.
Many diverse items. 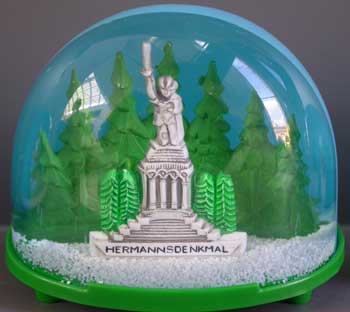 Thoughts
They said it might do us good to read Goethe and Schiller today, but this wasn’t substantiated. In what way was it meant?
They talked about the theatre being a moralische Anstalt and TV not being. I’ve often thought about this, because German TV can tend to moralize. For example, every six months the news programme suddenly describes a new film it thinks we should see, even though the rest of the time it has no interest in reviews. I listed part of one exhibit in an earlier entry. But TV doesn’t work like that.
At the end of the catalogue are some materials on a survey done in 9 countries plus Germany. Open questions about the Germans are categorized. Example: Germany most often referred to ‘fleißig und pflichtbewusst’, Czechs most often to ‘diszipliniert’.
Negative factors: the Germans most often said their negative side is that they are pessimistic and complain a lot. No other country mentioned this at all! Lots of Czechs said ‘arrogant’, lots of Austrians just said, ‘Don’t like the Germans’.
What I missed was: why didn’t they ask the Swiss? Would the Swiss have said the Germans are untidy?

Information on the exhibition in German and English.
Die Zeit: Online-Umfrage zum Thema