Feuerzangenbowle is a form of punch, where a sugar loaf supported horizontally above a pot of mulled wine is soaked with rum and set light to, so that the burning sugar falls into the wine. h2g2, the BBC’s proto-Wiki, describes how to do it.

This picture, which I took yesterday at about 17.30, shows a cauldron calling itself the biggest Feuerzangenbowle in the world, which has been irritating some persons in Nuremberg who claim it draws people away from the Christkindlsmarkt (that’s over now, but the Feuerzangenbowle continues till Sunday). 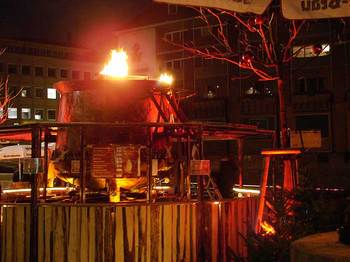 It was translated as ‘the world’s biggest burnt punch event’, and I see Muret-Sanders has ‘burnt punch’, a rather disturbing and puzzling term. I also found on the Web ‘mulled wine punch’, which sounds better, although it rather glosses over the role of the rum, ‘flaming red wine punch’, ‘flaming fire tongs punch’ (sounds like the tongs we used to use to put coal on the fire, and as if the tongs were on fire – the Feuerzange is a tong-like device intended to hold the sugar loaf). The Heinz Rühmann film (which was showing on two screens at the site) is even once rendered as ‘The Fire Tongue Bowl’, a masterpiece of false friendliness.

For a picture of a sugar loaf (Zuckerhut), I turn to CAPL.