I nearly blogged last week about the wash-away image of Homer Simpson that was painted next to the Cerne Abbas giant. I may not be a pagan, and I may like the Simpsons, but I was not impressed with this blatant act of publicity. This is what it should look like, without Homer: 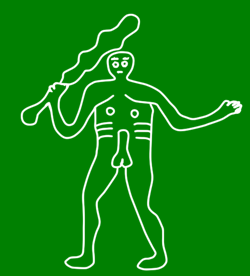 But at the time I decided against it, I didn’t realize how effective rainmaking magic can be – Sky reported on July 17 (with a complete picture):

Pagans have pledged to perform “rain magic” to wash away cartoon character Homer Simpson after he was painted next to their famous fertility symbol – the Cerne Abbas giant.

Severe flooding has hit roads in several residential areas throughout Dorset causing drivers major problems.
There have been floods in Bournemouth and Poole, with roads submerged and drains overflowing.

I haven’t read anything about how Homer is doing.

LATER NOTE: See Céline’s comment with the link to the Daily Telegraph.

One diocesan bishop has even claimed that laws that have undermined marriage, including the introduction of pro-gay legislation, have provoked God to act by sending the storms that have left thousands of people homeless.

Pursuing this further, I checked up Sodom and Gomorrha in Wikipedia and quote:

A few classical Jewish texts do not specifically indicate that God destroyed Sodom and Gomorrah because the inhabitants were homosexual, or sexually deviant from what was recorded as God’s law of natural order, but rather, they were destroyed because the inhabitants were generally morally depraved and uncompromisingly greedy. Though homosexual acts were seen as an abomination, the people of Sodom and Gomorrah were guilty of many other sins as well.

So the jury is still out on this one, as they say.

LATER STILL NOTE:
Via a commenter on SkeptoBot, the bishops have been misquoted. Gow disclaimed on July 1st, so the Telegraph is digging up old dirt. Liverpool, Carlisle:

The Bishop of Carlisle did not say that God sent the floods.
He and the Bishop of Liverpool did point out what environmental campaigners have been saying for years: that the floods are a consequence of global warming, which is a result of our lack of restraint and lack of care for our planet. The two Bishops expressed their sympathy for those who are suffering as a result of the floods.

I doubt the matter is as simple as that, but let’s not deflect attention from Homer Simpson.

10 thoughts on “The dangers of Homer / Regen in England”