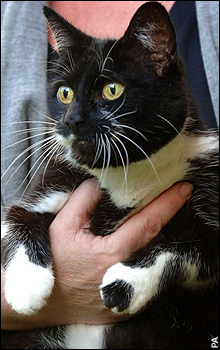 Now that the Blairs have gone, the Chancellor of the Exchequer is living in the flat above 10 Downing Street and a new cat, Sybil, has been introduced, as reported by the Daily Telegraph and other sources.

Reports are accompanied by stories of the much-missed Humphrey. This was new to me:

In June 1995 when Mr Major was in Downing Street, he went missing and was presumed dead, but returned after staff at a Westminster medical college read his obituary and realised the cat that had made his way into their building was, in fact, Humphrey.

He remembers the “ludicrous situation of me and the Cabinet Secretary both having to spend a large part of our day dealing with it.
“The bloody thing was retired in Surrey, and a bit old now, and Robin B (Sir Robin Butler, the Cabinet Secretary) wanted us to be sure we would not be bringing any undue stress or attention on his new owner.”

Humphrey apparently died in March 2006, aged 18. His food and vet’s bills had been paid with a £100 annual stipend from the Cabinet Office budget.