Here are a couple of shots of a ballot paper for the local elections in Fürth. 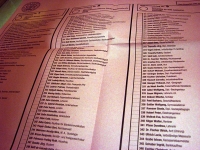 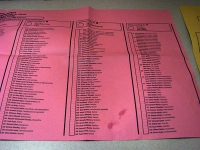 As for the pink one, there is no information available in writing on how to fill it in. I had forgotten, so I was sent to a helper, who informed me rather superficially.

I can simply choose one party, putting a cross at the top. That seems to include one vote for each of the 50 (I think) names under that party (Die Linke has fewer candidates). But if I put a the figure 3 by a particular name, my votes go to that name first, even if it’s in another party, and they’re deducted from the main party I chose. (Actually, 3 is not the minimum – presumably 1 is the minimum – but they didn’t tell me that). I asked where I could read about it and I was told in the paper – but I missed that date – or on the Internet, but where on the Internet? No answer forthcoming.

This is not an invitation for an explanation – I’ve had it again and again. Kumulieren means giving one candidate up to three votes, and panaschieren means favouring more than one party, which I can reveal I did.

Only after coming home did I discover this explanation (in German) and this test ballot paper.