Weißwurstäquator, from the mysterious Kamelopedia (albeit misplacing Franconia vis-à-vis the WW):

Within Germany, the dividing line is the River Danube, which puts me north of the equator. Wikipedia has a map showing the Danube, but the Weißwurst is not eaten everywhere south of the Danube, of course, only, at most, in the German bit (and there, ideally only before the cuckoo clock strikes midday).

Meanwhile, Strange Maps has a graphic image of the Swiss Röstigraben, and much information. Here is a more detailed map.

The language border dividing these two areas is known jestingly as the Röstigraben (in German) or the rideau de rösti (in French). A Graben is a ditch and a rideau is a curtain, so you get the idea of separation – but what a Rösti is and why it is significant, requires a bit more explanation.

This dish is made mainly by frying grated potatoes in a pan. It was formerly eaten as breakfast by farmers in the (German-speaking) Bern canton. The original conceit of the Röstigraben was that it constituted the western limit of the German Swiss culture, beyond which people spoke (and ate) differently.

The Rösti has gained popularity as a side dish all over Switzerland, but the language and cultural differences persist.

Another culinary division mentioned in comments to the above is the Gefilte Fish Line:

The “gefilte fish line” ran though eastern Poland.
Jews living to the west — most of Poland, as well as Germany and the rest of Western Europe — ate the sweet gefilte fish. Those to the east — Lithuania, Latvia and Russia — ate the peppery version.
But Steinlauf’s tale is not just a fish story. It’s also about language.
He said the “gefilte fish line” roughly overlaps another important line: a linguistic divide between two major variants of Yiddish.

LATER NOTE: Here is a map showing the Grits Line (see comments). The map was originally from CNN but I found it in this forum. 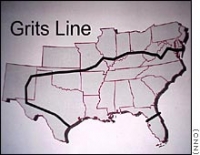 Thanks to the Great Wall of Catalonia.