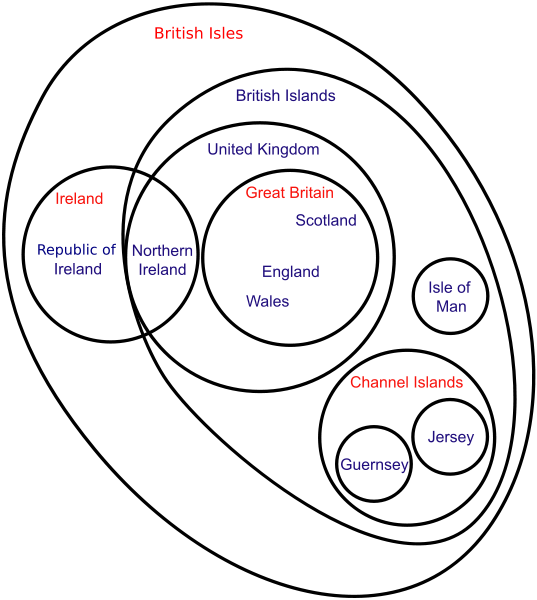 This Euler diagram of British Isles terminology (Wikipedia, GNU Free Documentation Licence) seems a good place to start. By ‘start’, I mean get a few terms straight before plunging into how the common law came into existence on the islands.

On the diagram, red means ‘geographic’ and blue means ‘political entities (may also be geographic)’.

But note that the Wikipedia article Terminology of the British Isles has many other maps and comments on this terminology.

Now let’s consider some, but not all, of the terms.

Great Britain: the name of the large island. It comes from the Old French for Brittany. OED Britain: ‘The proper name of the whole island containing England, Wales, and Scotland, with their dependencies; more fully called Great Britain; now also used for the British state or empire as a whole.’

Great Britain also includes a number of offshore islands, although they are not mentioned separately here, for instance the Shetlands, the Orkneys, the Hebrides, Anglesey, the Isle of Wight. It does not include the Channel Isles or the Isle of Man – or does it?

The British Isles: Two comments on this. First, as it’s a geographical term, I have always assumed it did not include the Channel Isles, which are geographically much closer to Europe. Second, it’s a controversial term, especially in Ireland. Some alternatives are mooted here, for instance Great Britain and Ireland (but that apparently omits the Isle of Man from the group).

British Islands: This is a fairly uncommon term, but it is defined in the Interpretation Act.

“British Islands” means the United Kingdom, the Channel Islands and the Isle of Man. [1889]

United Kingdom: the full political name is The United Kingdom of Great Britain and Northern Ireland. As the diagram shows, it doesn’t include the Channel Islands and the Isle of Man. These are Crown dependencies, so they are politically associated with the UK.

Republic of Ireland: This term is widely used, especially in Britain. But the name of the country is Ireland (or in Irish Éire). That’s what it’s called in the EU, too.