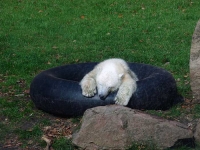 I have mentioned Flocke here before, but it was only at the beginning of November that I got round to seeing her. It was fairly sunny and she was asleep. It was the school holidays, and a mother kept saying to her child, ‘Sie ist eine Schlafmütze’ (which was slightly more tolerable than the man who was making snorting noises at the red river hogs).

This was just in time for this nice article on Knut, Flocke, and Co: the bear facts revealed by Birgit Clark in the online version of the Journal of Intellectual Property and Practice

Here is the abstract:

Legal context: It appears that Germans just cannot get enough of their bears these days, whether it is cuddly Knut, Berlin zoo’s celebrity polar bear with a Vanity Fair magazine cover, cute Flocke, Nuremberg zoo’s polar bear cub with her own website and marketing machine, or little Wilbär, their understated polar bear cousin from the Stuttgart zoo. In the context of marketing the birth of high-profile zoo animals, some interesting legal issues arise.

Key points: The article aims to give an account of how the Germanic bear craze started and looks at the marketing and merchandise machinery involved. In particular, it discusses the trade mark disputes over polar bear cub Flocke, as decided by the Regional Court of Nuremberg-Fürth in March 2008, and the trade mark dispute over Austrian panda bear cub Fu Long.

Practical significance: The article examines some of the trade mark law issues surrounding the marketing of the birth of high profile zoo animals. It examines the financial worth of polar bear trade marks, the perils of public naming campaigns, and shows how serious problems can result from not taking trade mark protection seriously at an early stage.

The article also deals with the ‘problem bear’ Bruno, who has now been stuffed and can be seen in Munich.