Speakers last night (Lothar Berthold did not speak, for lack of time, but has just published a book on the Weinstraße/Rudolf-Breitscheid-Straße):

Dr. Christofer Hornstein, architect – talking not about architecture, but about town planning:

1. Fürth needs pathways from E to W. These are:
Alexanderstraße (small)
Moststraße (a bit more impressive)
Rudolf-Breitscheid-Straße (the main one)

The city council has tried for many years to create a passage between Schwabacherstraße and Friedrichstraße, another E – W link, but this failed by reason of property owners’ refusal. But it was the right idea.

The Neue Mitte shopping centre would cut off this link. 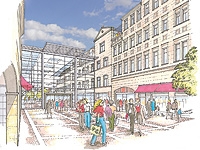 the ends are glassed in and Rudolf-Breitscheid-Straße appears to continue as a pedestrian zone (albeit closed late at night)
but it would be a gallery, opened up to provide a view down, and probably escalators
on top of this, the direction passers-by would be guided in would be a horseshoe shape almost at right angles to Rudolf-Breitscheidstraße
the glassed-in ends give the impression of transparency, but there would certainly be advertising there (see Saturn)

3. Quotes from the regulations (Hausordnung) of the Erlanger Arkaden:
no cycling, and bikes may not be pushed through (so much for fahrradfreundliche Stadt and cycling mayor)
persons may only remain on the premises for permitted purposes
the management has the right to ask people to leave

This was an excellent brief introduction, and (as yet) not reported in the Fürther Nachrichten, perhaps because they were busy interviewing and photographing the main speaker outside.

The talk was nothing like as aggressive as the above publisher’s blurb or the local paper make it appear. Topics were:

Building in town is a good idea, but above a certain size, a centre bleeds the rest of the town shops dry
car parks should be small enough for shoppers to consider parking elsewhere, so they do not just visit the shopping centre but walk through the rest of the town too
figures on effective floor areas pro inhabitant, and on distances from other attractions, were given
procedure of investors like Sonae Sierra: they nearly always approach the town council themselves with a plan they say is final, and insist there be no publicity, or they will withdraw
financing of investors: at least before the banking crisis, they made 8% on their investment (for how long?) – they quickly sold to other investors, who undertook obligations for a period of years (how long?), so that the first investor soon had no financial risk at all
investors were expanding into eastern Europe, but financial problems there mean they are concentrating on Germany again
as in a snowball scheme, the investor is constantly looking for new projects
no criticism of the investor, and the constant expansion is sensible business behaviour
but town/city councils are naive
the town should draw up a plan and invite tenders
the building of a shopping centre in an existing city is too complex for councils to assess – they need to call in experts

Problems of the existing City Center:
badly planned: usually there are entrances only at both ends of shopping centres, not in the middle
there is usually an attraction in the centre, but that is not the case here (see picture)
the lowest level is too dark

It could be improved, but apparently there are problems with the private owners.

If a city centre begins to die, the sequence of shops is:
Fachgeschäft (specialist shop)
Billigfilialist (cheap chainstore, e.g. McGeiz I suppose)
1-Euro shop (there’s one of these next door and one across the road)
Insurance agency
Piercing salon (maybe there are more of these in Braunschweig than in Fürth?)
Empty

The arguments about the size of the centre seemed convincing to me. Of course one would need to read the book. According to the Fürther Nachrichten, Pump-Uhlmann was involved of a long-term study of twelve cities with shopping centres. If it was found that purchasing increased in only 5 of them, that’s nearly 50 per cent.

The bigger problem is planning an alternative. Passages or arcades on the Wölfel land, a small centre on the Fiedler area and something else on the Commerzbank site – who is going to plan this?