Die Zeit recommends corned beef for Labskaus, although it says salt beef is traditional, minced. Fortunately the corned beef comes from a tin (in Germany you can buy an inferior kind of corned beef, pronounced cornid beef, from delicatessen counters). 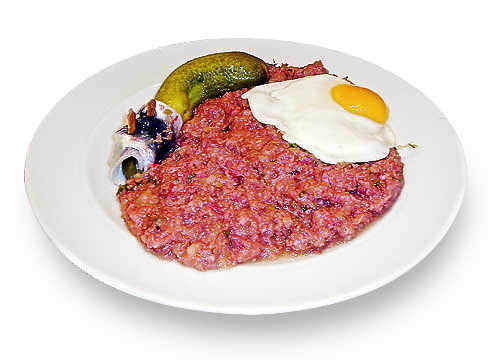 Scouse, the Liverpool dialect, has the same origin. Wikipedia:

The word Scouse was originally a variation of “lobscouse”[2], the name of a traditional dish of Scouse made with lamb stew mixed with hardtack eaten by sailors. Alternative recipes have included beef and thickened with the gelatin sauce found in cowheel or pig trotter in addition to various root vegetables. Various spellings can still be traced, including “lobscows” from Wales, and some families refer to this stew as “lobby” rather than scouse, as in the Potteries (Stoke-on-Trent), where a ‘bowl of lobby’ is a welcome meal on a cold winter’s night. In Leigh, between Liverpool and Manchester, there is even a “Lobby shop”. The dish was traditionally the fare of the poor people, using the cheapest cuts of meat available, and indeed when no meat at all was available scouse was still made, but this “vegetarian” version was known as “blind scouse”.[citation needed] The term remained a purely local word until its popularisation in the sitcom Till Death Us Do Part, which some also believe to have introduced stereotypes about Liverpudlians. It is also thought that there may once have been a giant man that came from the area called “Jon Scouse”.[3]

Here’s something about the Hamburg variety in English. Pictures of scouse can also be found via the Google image search.

2 thoughts on “Scouse and Labskaus”