I was pleased but surprised that Herta Müller got the Nobel Prize for Literature.

I read a few of her stories and two novels while she was still in Romania (till 1987) and have meant to come back to them. What she writes is rightly described as poetic, but it’s easier going than Elfriede Jelinek and I should think quite translatable.

In particular I remember a story called Das Schwäbische Bad, about a whole family one after the other using the same bathwater. Apparently this story was not well received by a number of Banat Swabians.

Extract in English from Everything I Own I Carry With Me (Atemschaukel), tranlated by Donal McLaughlin.

The war was still on in January 1945. Shocked that, in the depths of winter, I was to be taken who-knows-where by the Russians, everyone wanted to give me something that would be useful, maybe, even if it didn’t help. Because nothing on earth could help. It was irrevocable: I was on the Russians’ list, so everyone gave me something – and drew their own conclusions as they did. I took the things and, at the age of seventeen, drew my own conclusion: the timing was right for going away. I could have done without the list being the reason, but if things didn’t turn out too badly, it would even be good for me. I wanted away from this thimble of a town, where all the stones had eyes. I wasn’t so much afraid as secretly impatient. And I had a bad conscience because the list that caused my relatives such anguish was, for me, tolerable. They feared that in another country something might happen to me. I wanted to go to a place that did not know me.

In Romania, there are two big groups of Germans: the Transylvanian Saxons (Siebenbürger Sachsen) and the Banat Swabians (Banater Schwaben). Herta Müller is one of the latter. Previously the most famous was Johnny Weissmüller. This map is from Wikimedia Commons and relates to the year 1945. Some Romanian Germans succeeded in avoiding deportation by emigrating at that time: 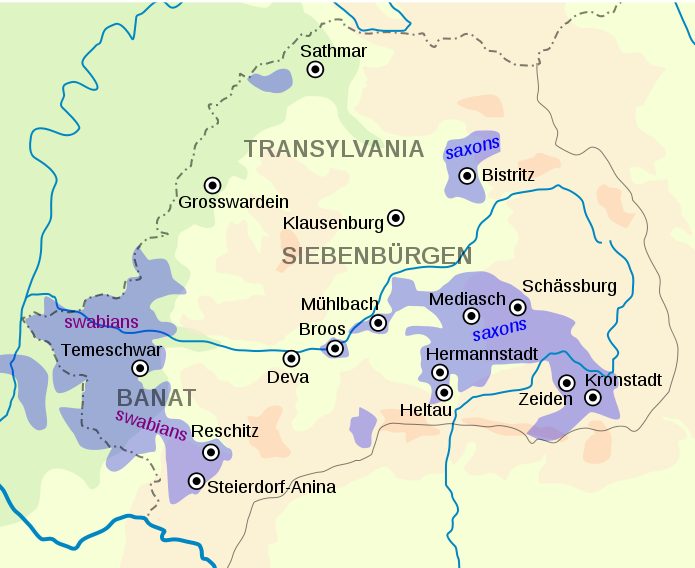 For most of WWII, Romania was on the German side, but in 1944 it joined the Allies. As far as I know, the Romanian Germans stayed loyal to Hitler. From 1945 on, all men between 17 and 45 and women between 18 and 30, with a few exceptions, were sent to labour camps in the Soviet Union for years.

The deportation order applied to all men between the ages of 17 and 45 and women between 18 and 30. Only pregnant women, women with children less than a year old and persons unable to work were excluded.

Here’s an English page with a lot of links (the Literary Saloon, via The Elegant Variation)

Expulsion of Germans from Romania after World War II

If you can’t get Herta Müller books at the moment, you can read her husband, Richard Wagner, in German.