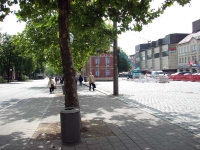 This was the Fürther Freiheit, the big central square, last Saturday. In the background is the massive and ugly building that used to be the Quelle department store (I once heard an American woman describing it as ‘Quellies’, just like we used to call Woolworths ‘Woolies’). The fruit and veg market has been moved into the distance, onto the Kleine Freiheit.

The red structure in the middle is a mock-up in cloth of the original station of the first railway in Germany, the Ludwigsbahnhof. It will be finished and on view from 13th August for a couple of weeks.

The following close-up gives a better view of the steps from the Freiheit to the street. This was the bed of the original railway – the railway station is elsewhere nowadays. 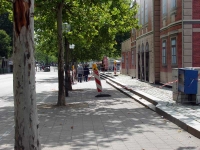