I haven’t got much time to post and this situation is likely to continue for a few weeks. So here are some more local photos.

First of all, on Sunday, after the (Catholic) service in the church Unsere Liebe Frau, I wondered why the good stuff, icons, was being brought out only after the congregation had gone. But it turned out they were reorganising for the Greek Orthodox service later. One of the Greeks, perhaps sensing my lack of religious belief, pointed out Mary and Jesus to me. 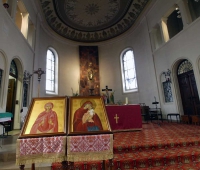 And since it’s that time of year, here is a box of mixed doughnuts at Beck. I have seen two other such boxes at other bakers. I suppose it’s a good idea to get rid of all flavours at the same rate. 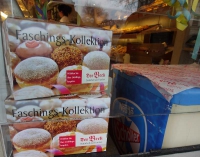