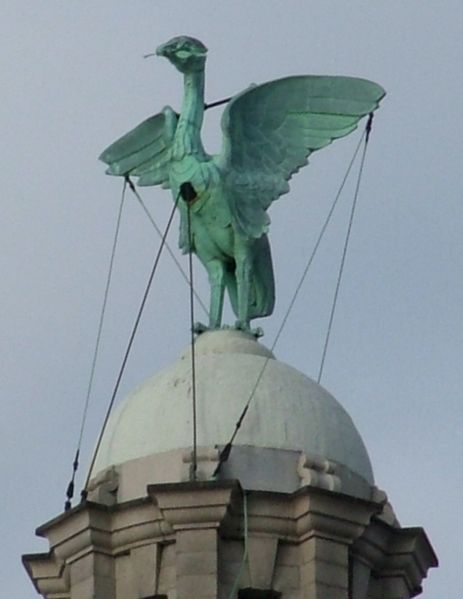 The Liver birds, a Liverpool landmark, were made by a German who had taken British citizenship twenty years early but nevertheless was treated as an enemy alien during the First World War and forced to return to Germany, leaving his wife and child behind, after the war. Carl Bernard Bartels, whose father was a Black Forest woodcarver, did manage to return to England, but it’s only this week that he has been given some honour – on the centenary of the building. The Guardian:

“He also made artificial limbs for servicemen in the second world war,” said his great-grandson Tim Olden, a graphic artist from Southampton who is one of 13 family members travelling to Liverpool to receive the award. “But it’s only very recently that he has started to get real recognition. My mother took a ‘let things lie’ attitude, but one of her last wishes was to go and see the birds, and Liverpool gave her a warm welcome.”

The visit in 1998 began Liverpool’s rediscovery of Bartels, including his skill as the first person to sculpt a nonexistent bird only previously portrayed in drawings and paintings. He also managed to create a male and female, giving rise to the scouse legend that one or the other flaps its wings if a virgin or an honest man walks along Pier Head.

Presumably that’s why they never flap their wings.