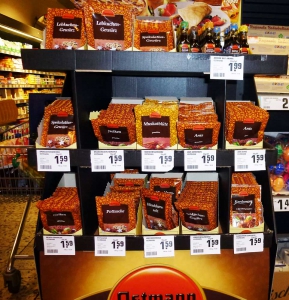 Suddenly a range of spices have become easier to find. This would have been the place to get mace for my pork pies a few weeks ago.

The misleadingly named London Eats blog has something about Hirschhornsalz here:

Biscuits made, I did a little research on this stinky but effective raising agent. Ammonium carbonate was originally known by the more poetic name salt of hartshorn, and was apparently derived from the horns of the male red deer (!). If you’re worried this might be cruel, I’m happy to note the antlers appear in the spring and are naturally shed each year, and in any event, these days you buy the chemical powder in stores. It inevitably features in German and Nordic baking, given that these are the areas in which the red deer might be found wandering in the forest, and in a lot of recipes, nothing else will really do if you want the requisite lightness. If you’re a curious Londoner, and don’t have deer roaming in the back garden, then you can buy it here.

Since hartshorn (bakers’ ammonia) and potash are not recommended for soft cakes, it is not surprising that baking powder came off best.

About.com on German language has some Christmas recipes in both languages for more information