At Christmas 2010 I posted about this Bauhaus-type house I had seen on a walk in Upminster (London Borough of Havering).

Now I have found someone to ask about it. David Anderson has a website called Modern London Houses. I had a look at some other houses in Havering, in Heath Drive and Brook Road in Romford, and there was a definite similarity. But the Upminster house, in The Fairway, is quite a one-off building surrounded by others in a garden suburb style. 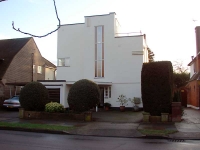 I wrote to David and he found one reference which was obviously to this house:

It’s obviously a thirties house, and I do have one reference, which is presumably to this house:

The Twentieth Century Society, Journal No2, p120 lists a house built in Fairway, Upminster in 1934 without naming the architect. It was called ‘Oronsay’ and was commissioned by an engineer of the P&O ship SS Oronsay.