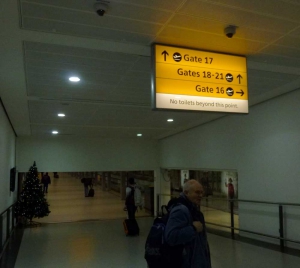 I’ve just been to London for a week, flying Lufthansa from Nuremberg with a change in Frankfurt. In both directions, my suitcase (checked-in baggage) did not make it. On the first journey, I was told the stopover in Frankfurt had been too short. The suitcase was delivered the next afternoon, about 24 hours after arrival. On the return journey, the suitcase was totally mislaid. I was told the label had torn off. It was delivered less than 48 hours later.

Advice for future trips: if you talk to Lufthansa staff in German, check how they translate what you say into English. Ein roter Band auf den Griff geklebt/ein roter Klebeband is not a red ribbon (eine rote Schleife). I did get them to change it to red tape, but that was only after I saw it online the next day.

It was also a pain walking 25 minutes to the next terminal to buy a toothbrush in London. I was told there were no shops where I landed.

One good thing at Heathrow: 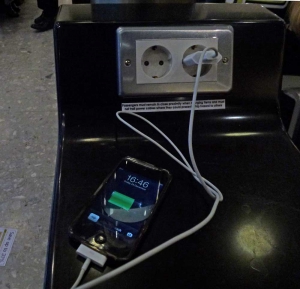 Not only is my iPod being charged, but it has continental sockets on one side and UK sockets on the other.

How do you get to ride those carts at Frankfurt? It seems I am always attempting to run through the airport to catch the connecting flight, but I saw some Chinese people using one of those carts and was very envious.