A colleague was wondering how to translate this term – Nachtbriefkasten or Fristenbriefkasten. I’ve often seen them but it had never struck me how peculiar they are to the German-speaking world. They are designed to recognize items posted up to midnight of a deadline date. Earlier, there must have been someone who did this, but seemingly it is done electronically now. Here is a small postbox which produces another shelf when the clock strikes twelve. A Google image search for Nachtbriefkasten will show many more.

I don’t think there’s a special translation – you would have to explain it if it was important.

Here is the local Amtsgericht one, photographed this evening: 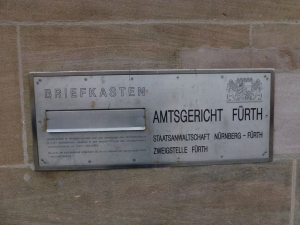 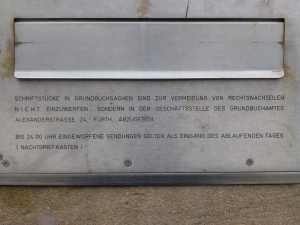 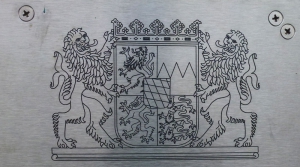 And here’s an explanation in English of the coat of arms of Bavaria (you have to click through to see the colours).

The modern coat of arms was designed by Eduard Ege, following heraldic traditions, in 1946.

The Golden Lion: At the dexter chief, sable, a lion rampant Or, armed and langued gules. This represents the administrative region of Upper Palatinate. It is identical to the coat of arms of the Electorate of the Palatinate.
The “Franconian Rake”: At the sinister chief, per fess dancetty, gules and argent. This represents the administrative regions of Upper, Middle and Lower Franconia. This was the coat of arms of the prince bishops of Würzburg, who were also dukes of Franconia.[3]
The Blue Panther: At the dexter base, argent, a panther rampant azure, armed Or and langued gules. This represents the regions of Lower and Upper Bavaria.[2]
The Three Lions: At the sinister base, Or, three lions passant guardant sable, armed and langued gules. This represents Swabia.[2]
The White-And-Blue Heart Shield: The heart shield of white and blue oblique fusils was originally the coat of arms of the Counts of Bogen, adopted in 1247 by the House of Wittelsbach. The white-and-blue fusils are indisputably the emblem of Bavaria and the heart shield today symbolizes Bavaria as a whole. Along with the People’s Crown, it is officially used as the Minor Coat of Arms.[2]
The People’s Crown: The four coat fields with the heart shield in the centre are crowned with a golden band with precious stones decorated with five ornamental leaves. This crown appeared for the first time in the coat of arms in 1923 to symbolize sovereignty of the people after the dropping out of the royal crown.[2]