I’ve mentioned the Festsaal in the Park Hotel before, but when I saw it the ceiling construction was hidden.

The ceiling is pretty undamaged, but the (listed) banqueting hall doesn’t fit into the idea of a modern shopping centre so it is about to be demolished.

In this process, the ceiling has now been opened up. Ralph Stenzel has published some photos of it on the Fürther Freiheit blog under the title Wachgeküßt, um zu sterben? (he prefers the alte Rechtschreibung). I’ve stolen one here as a taster – please click through for five photos plus one of the demolition in progress of the adjoining Fiedler building, all thumbnails clickable to enlarge: 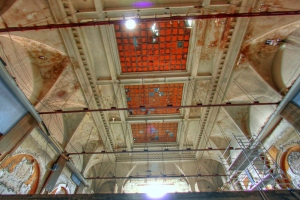