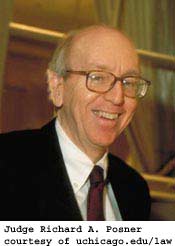 (via University of Texas)

In the case of Lynn A. Joy v. Hay Group, Inc., (a diversity case), Judge Richard Posner of the U.S. Court of Appeals for the Seventh Circuit held that a dictionary could be admitted to define the word ’cause’.

bq. HGI argues that the contractual term cause is unambiguous and that the testimony of Lacey and Bassick is ineligible to create an ambiguity because it is not objective evidence. The district court agreed and added that the word
cause clearly covered the ground on which Joy was fired because one of the dictionary definitions of the word is a reason, motive, or ground for some action. That reasoning is untenable; HGI doesnt even try to defend it. The contract itself contrasts reasons and cause. Reasons other than cause are explicitly not a ground for denial of severance pay.

bq. The judges interpretation implies that if HGI had fired Joy because she was a woman, she would have been fired for cause and thus entitled to no severance pay, because there would have been a reason for firing herher sex. The judges error was to pick from among the several meanings of cause one that was inapplicable. Dictionaries give a range of linguistic possibilities; rarely do they help a court decide which one the drafter of the contract or statute in question intended; here, the contract actually excluded the judges choice.

This is well observed and very important and is precisely the problem about using dictionaries in court. As translators know, people often use words in a different way than the dictionary records them. The context usually makes it clear what was intended.

I once had something to do with a German case involving a translation in which the judge said that a particular word ‘staff’, was correct because he had seen it himself used in England in the right context (‘staff toilet’). The point may have been correct, but the evidence, from a judge whose English was rudimentary, was not. So beware of judges discussing language and translation.

This case is particularly interesting because it refers to the distinction between ‘reasons’ and ’cause’. Cause means something like ‘good reason’, whereas ‘reason’ means any reason. Only recently, a query to the Yahoo group juristische-uebersetzer asked whether the following sentence:

bq. This agreement may be canceled at any time by either party with or
without cause and for any or no reason.

should be translated in full or abbreviated. Immediately there came a reply to the list that this was the typical English-language belt-and-braces approach and ’cause’ was obviously identical in meaning to ‘reason’. Well, sometimes that’s true of pairs of words, but not here.