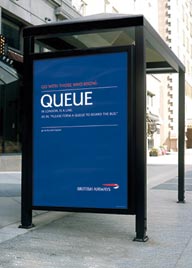 British Airways has started an advertising campaign in New York to help accustom Americans to British expressions before they arrive in the UK:

bq. On billboards and bus shelters across Manhattan, “Brit-speak” can be heard loud and clear. Next to one of the city’s busiest roads a huge billboard says: “This traffic is ‘bonkers’! In London, ‘bonkers’ means ‘crazy’.” On a bus shelter in Greenwich Village a poster reads: “Avoid ‘legging it’ by taking the bus. In London, ‘leg it’ means ‘to run quickly’.”

It’s all very well for British Airways to talk. But I remember when BOAC and BEA merged to form the new British Airways in 1973, there was a letter to the Times (that’s the Times of London for those across the pond, and in those days it was a respectable paper) consisting of only two words:

5 thoughts on “British English being promulgated in New York”