Fürther Nachrichten reports that one 77-year-old man is not prepared to sell his listed building, which is central to the shopping centre plans. He is a lawyer who was born there and doesn’t want to sell for personal reasons. He lives in Rothenburg ob der Tauber, another town where I doubt they will put a big shopping centre in the middle. (Can we contribute to his health insurance?) He apparently reacted the same way I did: how can they possibly consider integrating a previously public street into a private project?

(There’s a report in the Fürth section of the paper too, which isn’t online, as far as I can tell, and on p. 3 of the Fürth section there are reactions, including a short article on the Park Hotel and another on no. 12: it has belonged to a family for five generations).

This was common knowledge, I thought. The building in question, I seem to remember, is number twelve – yes, this is confirmed by the photo in the printed version of the paper (they’ve stopped putting photos online!) – these are my photos taken today: 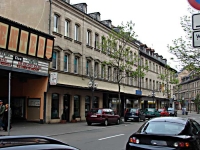 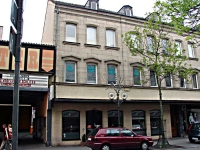 This is to the right of the cinema. It has a popular takeaway pizza shop , a clothes shop, a hairdresser and a nice jewellery shop on the ground floor, an architect on the first floor, and a Turkish organization somewhere inside. (Photos taken this morning).

The mayor said that if you had to choose one building that would hit the Neue Mitte where it really hurts, this would be it (‘Wenn man die Neue Mitte im Herzen treffen wollte, dann musste (müsste?) man sich dieses Gebäude aussuchen’).

It sounds to me as if the project is over. Sonae Sierra are prepared to discuss for the next four weeks or so whether another passageway is possible. It confirms what I gathered, that the size of the centre is vital to their plans, and they need to demolish this house to create enough space on that side of the street. I can’t imagine they will go along with the suggestions of a smaller-scale shopping centre.

There is also a commentary in the paper: Kein Grund zur Schwarzmalerei, and the Stadtheimatpfleger has already posted a PDF file on the subject.