It’s funny how you can walk around with a camera and be absolutely blind. A few years ago – it was 2006 – I was in Carey Street, near the famous lawyers’ pub Seven Stars. I saw a window with two barristers’ wigs on black velvet, so I took some time to photograph them. (I even blogged this at the time). 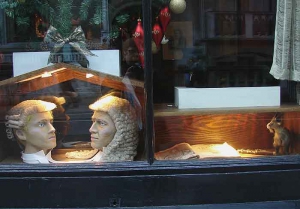 But I had a strange feeling I wasn’t alone, and after some time I saw that to the side of the wigs was a large black cat watching me. 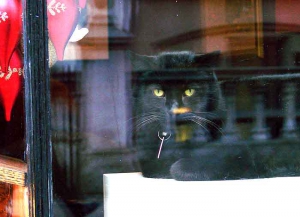 I see he has something like a dog tag hanging from his neck.

I have now been reading about the famous pub cat Tom Paine of the Seven Stars, and I realized that was actually a side window of the pub, and in this picture you can see the view from inside the pub.

I had been meaning to go and see him, not realizing I already had. And in October 2011 it was reported he died.

The memorial poem ends with a play on Alexander Pope’s Epigram Engraved on the Collar of a Dog Which I Gave to His Royal Highness:

I am his Highness’ dog at Kew;
Pray tell me, sir, whose dog are you?