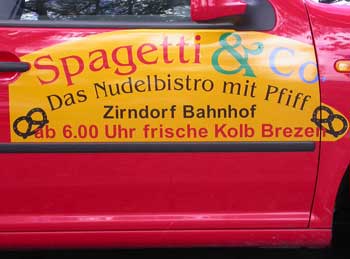 This is one of the new spellings – Spaghetti is still allowed as well as Spagetti. It’s long been possible to write Frisör / Friseur, but now you can have Grafit / Graphit, Panter / Panther, or Myrre / Myrrhe.

The topic of the German spelling reform was very popular in language blogs a week or so ago. I had the feeling some of those opining were speaking more in theory than from experience of this specific reform: it’s easier to say the reform is a good idea if one hasn’t experienced some of its illogicalities or realized just what kind of a camel an international German-speaking committee can design. There is a good summary of links by Mark Liberman at Eggcorn Log, and Eamonn Fitzgerald’s Rainy Day had a summary of an article in the Neuer Zürcher Zeitung on English spelling reform:

bq. Waser runs through the various attempts to “put manners” on English, from the British Spelling Reform Association, which Tennyson founded in 1879, to the more recently instigated Simplified Spelling Society. The latter, by the way, would have us turn “their language” into “thair languaje” and “other countries” into “uther cuntries”. Er, yes. Along with its website, the Simplified Spelling Society informs the world of its doings with “leeflets” and “pamflets “.

There was an article by Professor Theodor Ickler in the Frankfurter Allgemeine Zeitung on the latest edition of the Duden Rechtschreibwörterbuch that goes into some detail on the kinds of problems involved.