I noticed when reading the Adventures of an American Girl in Germany that she showed pictures of U.S. gallon milk jugs and said the standard German equivalent is 1-litre tetrapaks of long-life milk (H-Milch).

She may well be right – I would have said the common type is 1-litre tetrapaks of fresh milk.

There also appears to be a difference in frequency of full-fat and low-fat milk. The U.S. gallon jug has 1% fat milk. In Germany I usually see 3.5% or 1.5%. There are even half-litre cartons, and there are also bottles.

Personally I don’t like the taste of heat-treated milk (there’s some new stuff in the refrigerated department that lasts for 2 weeks or so that I haven’t tried), but then I can buy milk next door if I run out. But maybe a lot of people do buy the H-Milch.

In Britain, the system has changed over the years. I most often see one-pint or two-pint plastic jugs that fit in the fridge door (although probably American fridges have bigger doors). Here are two pictures of a British fridge: 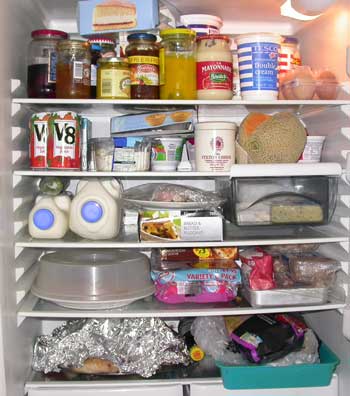 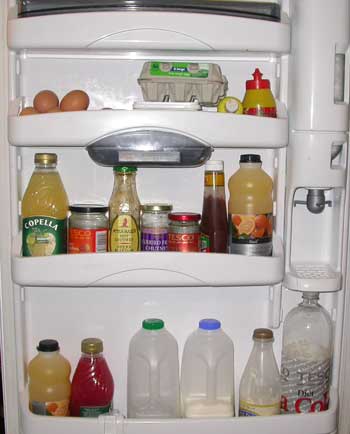 I looked on the Net for a milk bottle picture, and I found ‘old-fashioned milk bottle’ next to what I would call a ‘new-style milk bottle’. I can remember two shapes of bottle. There are so many antique milk bottles out there that it’s difficult to find definitive pictures. Many at Milk bottle of the Week. Then there’s a Euromyth that the EU wants to ban the UK glass milk bottle (still the standard if you have milk delivered, I believe).

Here’s a picture of a variety of milks from a dairy.