The Double-Tongued Word Wrester has an entry on the American term soup bunch.

bq. soup bunch n. a bundle of vegetables and herbs used in the preparation of soup.

Grant queries the suggested German origin via ‘suppebund’, saying it’s a rare term. Actually, the German term is Suppenbund, or at least it was the only one I knew when I lived in Cologne, but here in Bavaria all I encounter is Suppengemüse and Wurzelwerk.

The Variantenwörterbuch des Deutschen does not neglect this:

So was the practice of selling soup vegetables like this taken to the USA by Germans?

LATER NOTE: following up a link given in a comment, I found that wooden soup vegetables can be bought for children. I think it would make an interesting still life, sculpture or knitted piece too. Here’s the link and picture: 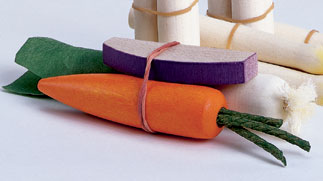