perlentaucher.de (in German) gives a number of links to international coverage (some of it in English) on the German elections called for by Schröder.

Some papers are trying out epithets for Angela Merkel, and Kate Connolly in the Telegraph chooses iron maiden. I suppose this is meant to be a weaker form of the Iron Lady. Unfortunately there seem to be weaknesses in British educational standards – the iron maiden was a bit tougher than Maggie.

bq. She is known by the German media as the “das eiserne mädchen” (the iron girl) – suggesting that she lacks the Iron Lady’s toughness in pushing through radical reforms. Indeed she herself has promoted the idea that she is “deeply rooted” in Germany’s social-market economy.

That’s true, but still no reason to mistranslate it.

Here is another picture on a book cover (Bram Stoker translated by Steffen Radlmaier). 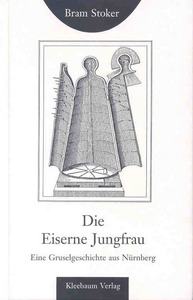 There, there is a page in English on the call for elections (but some of the sites linked are in German!)

Wikipedia on torture, with photo of iron maiden. The spikes pierced the victim’s eyes, chest and genitals.