Apparently the German TV station ARD broadcast an interview with an ‘uncle’ of Wayne Rooney’s. To quote the Independent:

bq. Mr Rooney describes himself as a freelance author and interpreter. He says he moved from Manchester to Germany in 1973, apparently completing a PhD at the University of Bremen, after learning German by reading the works of Heinrich Heine and Gotthold Lessing and the German football magazine Kicker.

It seemed odd that the man has the surname Rooney but claims to be a brother of Wayne’s mother. Perhaps the complexity of German names law confused the reporter.

bq. “He is a fantastic footballer. I always told him that he could be one of the greats if he could keep injury-free.” Asked how he reacted to news of Wayne Rooney’s broken metatarsal, he said: “I thought, it’s happened again. Oh shit!”

I wonder what he’s saying now. Nailbiting times at Wheeler’s Pub in Erlangen: 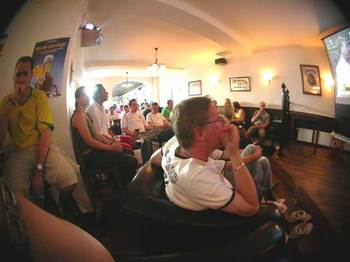 And recovering outside with fish and chips after the game: 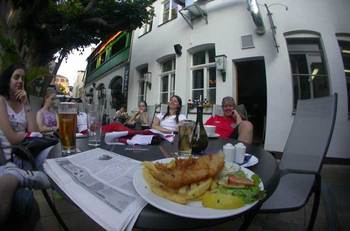