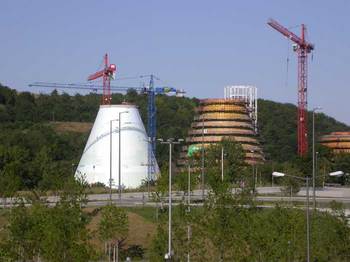 In April I posted a photo of an egg-shaped building going up near Fröttmaning in Munich. I couldn’t find out what it was.

In July I photographed a later stage of development. I also established on a Munich online map that there were a Klärwerk (sewage plant) and Biologische Versuchsanstalt marked there. In view of the local wind power plant, I didn’t think the biological experiments were recreating Frankenstein’s monster, but even Googling got me no further.

But now Brian has written to tell me (see comment under Döner Kebab Killer entry) the following:

bq. The domed buildings are being erected above the city’s water treatment plant to trap gasses that rise from the huge ponds where waste water is rotated to aerate it and mix in the algae.
The gas is then used as a source of energy. The technology is fairly new, so expect to see towers like that everywhere eventually.

I may even need to know this one day (I have been translating contracts about wood chip power plants and green electricity, where the energy and the greenness are sold separately). 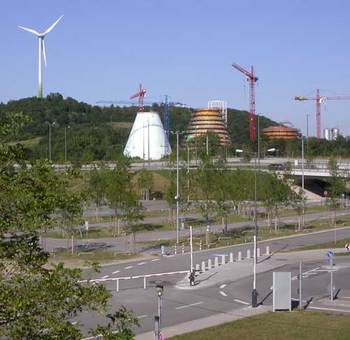