Signs on the autobahns in Germany like Medizin- und Universitätsstadt Erlangen or Fränkisches Seenland are called Unterrichtungstafeln. Fürth will be getting one of these along the lines of Denkmalstadt Fürth: the city of listed buildings.

But a few unlisted buildings have been sneaked in. The electronics chain Saturn (‘shoebox architecture’ according to the Stadtheimatpfleger Dr. Alexander Mayer) is coming, despite the heroic stand of a law firm who have long leases on four parking spaces around which Saturn is having to build.

The Zonebattler refers to the latest excitement. Here is the drawing (picture pinched from Fürther Nachrichten, but it isn’t originally theirs afaik): 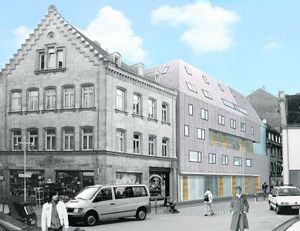 It may well be that at least at ground level it doesn’t look so bad, but I find it amazing that the Oberbürgermeister calls the demolished buildings ein Schandfleck (an eyesore, but the German term sounds even more derogatory). There’s a photograph of these harmless, unlisted buildings here, and here’s one I took in August: 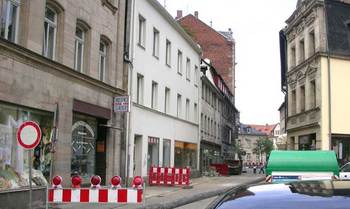 It may be that the eyesore was what the public couldn’t see – behind the façade: 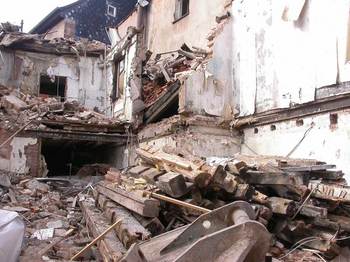 Petitions against the building can be signed in the Ganesha shop opposite (Ludwig-Erhard-Straße). They are merely symbolic as protests should apparently have been made earlier.

(Thanks to Ralph for the tipoff).