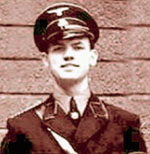 A FORMER SS officer convicted of murdering hundreds of civilians in Rome during the Second World War was cleared yesterday to leave house arrest every day to work, sparking outrage among Jewish groups.
Erich Priebke (93) was told by a military judge that he was free to leave his flat in Rome to work as a translator at his lawyer’s firm in the city. Under the terms of his detention, Priebke was also able leave the office for “essential requirements,” the judge said.

Erich Priebke was trained in the hotel business but started his linguistic career as an interpreter for the Gestapo in 1936. Thence he became a civil servant and from February 1941 was a liaison officer with the Italian police in the German Embassy in Rome. He is under house arrest (if he were younger it would be prison – he was born in 1913) for his part in the murder of 335 Italians in 1944 (the Ardeatine Caves massacre).

Thanks to Derek, who reports at www.flefo.org:

Even more remarkable is the storm of protest from Jewish organizations suggesting that SS Hauptsturmführer Priebke (rtd.) is using his employment as a translator in order to prepare his escape. I suppose they fear that he might be planning to cross the Alps on foot under cover of darkness and get back to his old friends in Germany.