Following the recent entry on changes to court dress in England and Wales, RA-Blog gives a link to a page with pictures of judicial dress all over the world.

It’s not quite accurate when referring to England and Wales – not surprisingly, since the situation is so complicated. And in England and Wales, ‘justices’ doesn’t refer to judges, but to lay magistrates.

>>Like everything else in Britain, British judicial costumes are regulated according to a myriad of ancient traditions, customs, and laws. Many of these rules date back to at least the 14th Century, making the modern British judicial system one of the world’s oldest.<< Does their dress date back that far? I don't think wigs were worn then. And what happened to 1066? I can't speak for Scotland and Northern Ireland (the page has separate pictures for Scotland later). >>The British judicial branch is very complex, and is composed of dozens of different courts of jurisdiction<< Not dozens. >> with grandiose names like the “Queen’s Bench” the “Chancery Division” and the “Crown Court.” Depending on which branch the judge belongs to, he could wear one of many different costumes. Unlike many other countries which limit their judges to wearing only red or black, in Britain judges wear almost every color. There are judges with blue robes, green robes, white robes, and even purple and pink ones. << I haven't checked the number of colours, but I have my doubts. >>There are several constants, however. All upper court justices in Britain wear the famous “full bottomed” powdered wigs while lower court judges wear the shorter “barrister” wig. << The full-bottomed wig is only for ceremonial occasions. In court they wear the bench wig - except the House of Lords judges, who don't wear wigs at all. On wigs, see earlier entry.

>>This is a holdover from the time when judges were members of the aristocracy, and it was considered fashionable for important people to show off their social status by wearing long flowing wigs. Once a year there is a special ceremony in Westminster Abbey during which all of the nation’s judges assemble to commemorate the start of the legal year. On formal occasions such as that, all judges wear “full bottomed” wigs.<< Exactly, and not on other occasions. The ceremony referred to is the Lord Chancellor's Breakfast. The picture of "more high court judges" with purple trim and full-bottomed wigs is a picture of the procession to the Lord Chancellor's Breakfast. Those are not high court judges, but circuit judges. By the way, the 'cross collar' is called 'bands'. For lots of pictures, including circuit judges in ordinary and ceremonial dress, see the wonderful PDF Legal Habits.

Another mystery to me is the picture that says ‘A lower court judge’. I don’t know what a lower court judge is supposed to mean – it can only mean a circuit judge (not a district judge, I think), and I don’t think it’s one of those. (The term ‘upper court’ quoted earlier is also dubious). I think it’s another manifestation of a high court judge. Here it is – any offers? 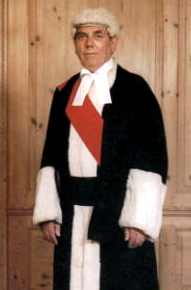 I’ve got a bit inured to English court dress, so I find the German Federal Constitutional Court judges the oddest. Their hats could have been designed for 2001. And I believe when they were invented, a theatrical costumier was consulted.