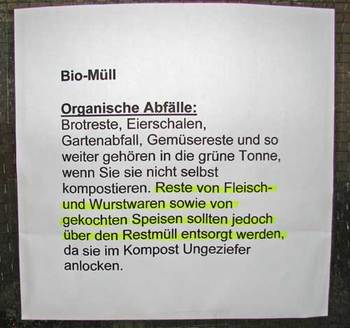 This is a partial answer to a topic that has sometimes cropped up in the comments, here for instance. This was posted after I put something like boiled potatoes in the green bin. Usually, if in doubt (as in the case of meat), I look at the Fürth website, and there it says Essensreste (remains of meals) are OK. The worst (and only other) occasion was when I got a highlighted flyer pushed under my door. I don’t mind being corrected – well, I do really – but I don’t like to think that if there are brown paper bags from eight flats and a shop in the green bin, someone recognizes which is mine.

Hence the query: who else uses the rubbish bins in the street for private refuse, to avoid detection ? And what euphemistic term could one give that –
Fremdentsorgung?

Here’s the list of what goes in the green bin, from the website of the city of Fürth: