The Defense Advanced Research Projects Agency (DARPA) (Wikipedia), which is responsible for the development of new technology for use by the US military, has commissioned a Multilingual Automatic Document Classification Analysis and Translation (MADCAT) system to convert documents of every kind in Arabic (in the first instance) into English. Thus Mark Rutherford on CNET. 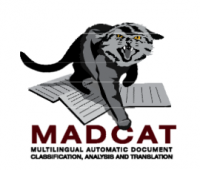 If and when it pans out, MADCAT is expected to provide “relevant, distilled, actionable information” to commanders and troops on the ground by translating foreign language text images accurately and automatically without bothering with linguists and analysts, according to the contract specifications. During the MADCAT proposal process DARPA demanded bidders demonstrate a “revolutionary approach,” one that will produce a new benchmark in language translation. Specifically excluded were “minor evolutionary” improvements or “narrow applications” to current technology.
BBN says it plans to pull it off by integrating “optical character recognition with state-of-the-art translation and distillation techniques,” while developing “novel methods for processing handwritten text,” according to its press release.