Here’s a diagram of the layout:

The usual approach is to go clockwise round the whole area, but probably missing out some animals. Coming back along the bottom, theoretically there is a sort of toy train you can ride on, but if it’s running, won’t there be queues? At the top right is the main restaurant, which is not at present self-service, and just below it the polar bear area – follow the signs to Aqua Park.

You can see some of that sandstone there, and the view of either Vilma or Vera shows that you might get a good view with binoculars even if it’s crowded. Flocke’s father Felix has now returned and Vilma has gone to Rostock. I would avoid this area altogether.

Another area you can avoid is centre top, the lions and tigers, since their quarters are being redone and they have been relocated away from Nuremberg.

Of course you would risk missing the ibis then, which would be a mistake. That’s the one small enclosure you can go into, in the modern zoo style. 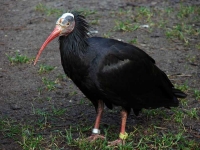 Somewhere along between all those is the Tropenhaus, a highlight, with tapirs, sloths and manatees. Outside it are also Red River hogs (Pinselohrschweine).

The children’s zoo is at the bottom right. Some zebus have recently been added.

The great strength of the zoo is the large number of hoofed animals and birds. Of course, your mileage may vary and you may like to see the gorillas, baboons etc. and dolphins. There is quite a good rhinoceros in the Dürer style, but unfortunately they always seem to get one of the ones that rubs its own horn away. 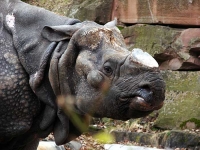 It does look very impressive from behind, though.

Here is a typical view of the paths in the zoo – this is going up towards the ibis – it is quite hilly in parts. 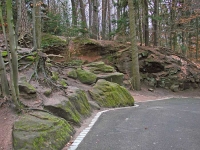 Here are price and travel details on the zoo’s site, and the zoo’s home page.

LATER NOTE: see comments for a reference to Google Earth.