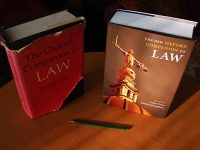 The Oxford Companion to Law (1980) was done completely by David M. Walker, a Scottish lawyer.

The New Oxford Companion to Law (2008) is edited by Peter Cane and Joanne Conaghan and written by a huge team.

(To click through to amazon.de – scroll down on right)

Both intended for non-lawyers, but they aren’t intended to give advice on rights.

The new book has quite a lot of illustrations, some in colour.

Organization of the new book: about forty subject headings were chosen, each with a number of subcategories. These are listed at the back: 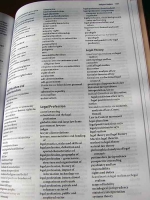 Other methods of navigation: a lot of cross-references (words in bold) and some zero-word alphabetical entry headings, referring the reader elsewhere. There are also further cross-references at the ends of some of the entries.

What has struck me so far: lots of great stuff, but a strange selection in some cases. See the picture above: I find a huge amount of legal theory, which to me seems out of place. There is an entry on ‘the Other’, and one on governmentality (Foucault), which makes the book very academic. There is more about gangmasters than the High Court (there isn’t much about the courts, although there is a diagram somewhere). A short entry by Peter Goodrich on Language and Law, but no entry specifically on forensic linguistics. Don’t be put off by this, though: the book contains masses of useful stuff.

Walker’s entry on German law was fuller and had a better bibliography (this just has two books by Norman Foster).