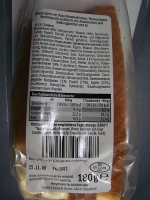 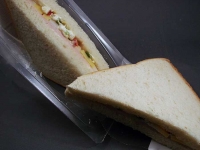 Is it Norma just cranking up for Thanksgiving? Actually, this doesn’t remind me very much of the sandwiches I ordered halves of in New York. And do they do Putenschinken (turkey ham)?

I had a somewhat similar experience when my family moved from England (where we’d spent 5 years), to White Plains, a suburb of New York. At the time England was not nearly as Americanized as it is now. We were absolutely stunned by the abundance, and color, and noise, of this new country we found ourselves in. Millions of TV channels! The huge portions at the diner where our mother took us for lunch! The chef’s salad bowl for one at Swenson’s that was the size of a bathtub. The too-big-even-with-two-hands sandwiches where the fillings were three times thicker than the bread slices!

In this connection, a video of Sarah Palin with turkeys being processed in the background.