The Bessere Mitte had wooden models of the shopping centre proposed by Sonae Sierra:# 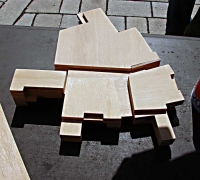 and the alternative they propose. 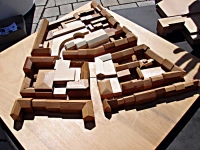 The top model corresponds to the three white blocks in the bottom model, which leaves Rudolf-Breitscheid-Straße open. This was at the Fürth Stadtfest yesterday. A couple talking to the campaigners felt that a 15,000 square metre shopping centre would be too small, and would not miss the listed buildings that would have to go (or be partly hidden).

I was pleased to hear recently that some of the independent shopkeepers have a parallel initiative. That shows that the opponents of the scheme aren’t just the few people who appeared on the stage at the civic hall meeting. That’s the Arbeitskreis kritische Einzelhändler Fürth.