From Thursday June 4th, Lidl are offering what they call British specialities. You can see them at the website now, but only for a week or so. You may have to enter a postcode – 90762 works! 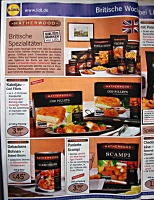 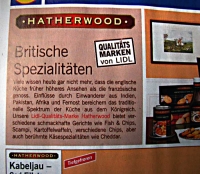 Yes, I too was surprised to read that British cooking had a higher reputation than French in the past. (In the Dark Ages?)

Fish and chips, individual pieces, in batter, with extra thick crunchy chips. But Alaska-Seelachsfiletstücke! I spend a lot of my time in Germany avoiding Seelachs. It’s probably coley, which we used to feed to the cats. Pollachius virens. Pollock sounds better, but still, I’ve never encountered that at a British fish and chip shop (cod, skate, rock eel/rock salmon, plaice, haddock).

Those are the first two of four pages. The others have mint sauce, mustard, brown sauce (Englische Würzsauce), caramel shortcakes, marmalade, jam, shortbread, salt and vinegar stick, Ribena substitute, and hand cooked chips (‘Our Lidl quality UK brand Hatherwood’ couldn’t manage to say ‘crisps’, so a bag of these, with a picture of Tower Bridge and some tartan on it, could be a curiosity.

Do they have a British week at Lidl in the Netherlands, commenters?