I was translating a guide to Würzburg cathedral when I started this blog in 2003. Last week I translated a leaflet to the Neumünsterkirche. Thus:

8:00 Weather not promising: will put off trip to Würzburg till tomorrow. Flooding predicted in south Bavaria, rain elsewhere in Bavaria, but less towards NE (i.e. the direction of Würzburg)

9:00 After Googling various weather reports, and it’s not raining in Fürth, I decide to go today rather than tomorrow (just as well, since unknown to me the ceremonial reopening of the church is on Wednesday evening)

10:45 Arrive in Würzburg and park at Congresszentrum – not my intention, but the Garmin satnav device I recently replaced my Tomtom with is a bit recalcitrant (and constantly tells me to take a ‘ramp’, see recent trip through the centre of Brussels). Park correctly next to a pillar (see later).

Walk towards church, with help from a passerby. Apple strudel with cream and Milchkaffee at Café Michel, who do quite a lot of strudels:

Picked up a couple of maps at the tourist info in Falkenhaus. Popped into large Hugendubel bookshop next to the church.

11:30 The church is closed till ‘summer 2009’ for renovation. I knew it was being renovated, hence the translation, but I had not considered this problem. Go to some diocese office next door to enquire, they send me to the Dommuseum, lady at the Dommuseum kindly phones around for me and when her colleague turns up, takes me to the side entrance. She also gives me a copy of the booklet on the reopening and the leaflet in German, which are waiting to be distributed on Wednesday evening.

I know the church used, long ago, to be red inside as well as out. It is now completely white and gold. The organ (1952) is being tuned, it sounds like, people with cloths are cleaning the floor or with brushes adding last touches of paint, tightening screws, using electric tools plugged into sockets concealed under pews.

(There were Gothic and Romanesque churches here before, and apparently during the restoration some coloured illustrations on the walls were restored and then covered up with white, because the renovation was to restore the church to its baroque version – it was barockisiert). 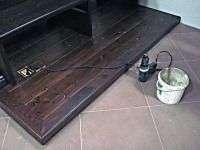 There are also two people sitting there preparing themselves to give guided tours from June 25th, with a large Baedeker-type volume, probably an architectural guide to Franconia. At last I find out why the Kreuzkrypta is so called, and that the Kiliansbrunnen is a well, but not why the painting ‘…den Wald vor lauter Bäumen’ (‘…the wood for the trees’) has that title, although it does seem appropriate.

12:30 I walk round the church looking at all and photographing some of the items numbered in the leaflet. Nearly all the Leuchter are candlesticks, sometimes more than one (the word Leuchter can be singular or plural), some of the Kreuze crosses and some crucifixes. The Gedenkschriften are epitaphs. At least I can use flash in the crypts (it was too dark to see if that was forbidden) and later get an impression on the computer, and here I can increase the ISO reading without worrying about the quality, although I do manage to get much better pictures from the publisher of the guide, Schnell & Steiner Verlag. The Retabel von Ben Willikens mit gegenübergestelltem nächtlichem Ausschnitt is a painting of an almost abstract entrance, in daylight, in blue tones, and the detail is not a detail of the painting itself, but a slightly altered detail in darker colours. Eventually I think I have solved everything.

13:20 off to the Residenz to do the 13:45 tour. I haven’t been round for a few years. No photos, even without flash, all bags to be put in lockers, but no indication where the tour starts. Good but routine fast tour. I don’t think the affordable literature available does justice to the images one might want to look at again later. Fortunately there is a very nice virtual tour online (that’s the English version, but there’s a German version too, of course) – it still wouldn’t enlarge enough to show ceiling details, but maybe it’s better in another browser).

14:45 Walked round the Hofgarten, increasingly slowly. It began to spit with rain, but I couldn’t be bothered to get my umbrella and rain jacket out. Here is a picture of tourists with cameras and umbrellas: 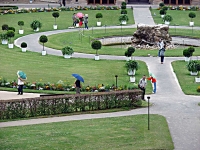 15:45 On way to car park, found a butcher’s where I got apple juice and Kasseler in a roll (some German butchers have hot selections for lunch and tables to stand and eat at).

16:20 Having located car park with great difficulty, forgot I was parked next to a pillar and had a fight with it. Car park was virtually empty, but despite this my attempts to back out misfired. Thank goodness for the ADAC. 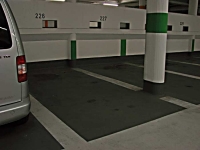 I find this pillar deceptively oval. I started in space 227, and at the left is the car I only just managed not to damage.