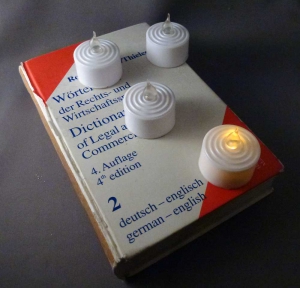 This is one of those times of year when Germans say everything should be besinnlich (thoughtful, contemplative, peaceful). It goes right up to December 24. Some excitement is allowed on December 25 and 26, then comes the time zwischen den Jahren (between the years) when it all goes besinnlich again. On December 31, however, you can buy fireworks and terrify the neighbourhood – rockets shot horizontally from first-floor balconies are the worst. It occurs to me that the violence of Silvester may directly result from too much Besinnlichkeit beforehand. 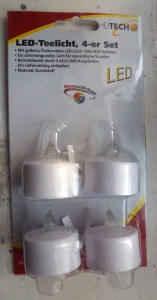 I don’t usually experience the four Advent Sundays, where first one candle, then two, three and finally four are lit on the Advent wreath, but now I can. Yesterday I was queueing for a long time (is there any other) in the post office, to return a Philips radio alarm clock which doesn’t work with your iPod Touch if it’s in its case, when I was able to snaffle these four LED teawarmer lights, with a flickering effect. Price only 2.99 euros. I admit that my copy of Romain needs a bit of repair.