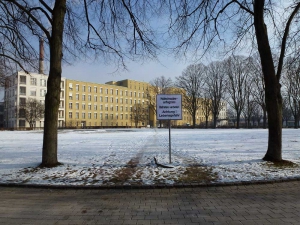 The Fürth hospital was built in 1931. You can see the original design – there is a huge new section attached on the back. It was originally a shallow building with big windows allowing light in from both front and back of each ward. The white sections at the ends are new too. Not sure what they charge for the rooms with a large corner balcony.

Note also a possible reason for any lack of doctors as there is a well-worn path across the helicopter landing pad.

Here’s something on the history (in German).

The original director of the hospital was Dr. Jakob Frank, who was driven out of his job in 1933 by the National Socialists, then worked at the Jewish hospital in Fürth and eventually emigrated to the USA via Sweden in 1939 (FürthWiki, German).