There’s always a lot to write about legal translation, but now for something more important. 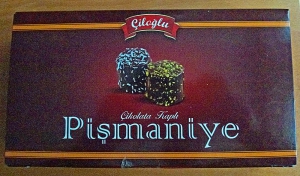 When I first saw pişmaniye and read the translation cotton candy (US for candy floss, German Zuckerwatte) but the ingredients only 50% sugar, the rest flour and butter, I was curious.

It’s very light and fluffy and difficult to eat without getting it everywhere. 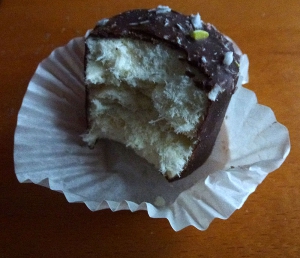 My local source was taken over by another firm and had only one box, chocolate-covered, left. I didn’t really want the chocolate, but it was good because it was very thinly coated and the chocolate coat made it easier not to make a mess – though not impossible, I can attest.

So I was excited when I got my hands, or rather my ereader, on Sherbet and Spice: The Complete Story of Turkish Sweets and Desserts by Mary Işin (the last i in the surname should not have a dot). I think I read about it in a tweet from Robyn Eckhardt, of the Eating Asia blog.

Mary Isin has lived in Turkey since 1973 and started researching Ottoman cuisine in 1983. She is the author of a Turkish cookery book, an encyclopedic dictionary of Ottoman cuisine and a transcription of an Ottoman cookery book as well as many articles on food history. She is also editor of A King’s Confectioner in the Orient and an eighteenth-century Turkish dictionary of Persian culinary terms.

The book appeared in Turkish first.

She calls pişmaniye, which has many names, keten helva (linen helva). Apparently it used to be made with great effort by several people on one evening in the days before television.

Keten helva is made in three stages: first flour and melted butter are stirred over heat for nearly an hour. Then sugar syrup is boiled to crack, pulled until it turns white and satiny, and shaped into a ring about 20 centimetres in diameter. Now comes the stages that requires the greatest skill. The pulled sugar ring is generously sprinkled with roasted flour and placed in the centre of a large circular tray. Three, four or more people sit around the tray, place both hands on the right and squeeze it, simultaneously moving it in an anticlockwise direction.

Here are two of the illustrations: 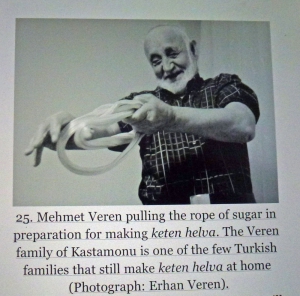 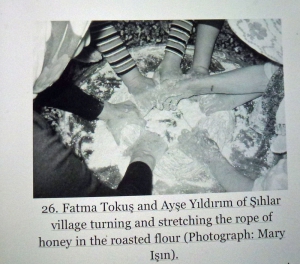 Pişmaniye is made by machine nowadays, or partly by machine. See this video (thanks Bettina!).