While UK university German departments are closing down and German is less and less popular as a school subject, let’s look at some people who studied German, or perhaps just learnt it, in the past. 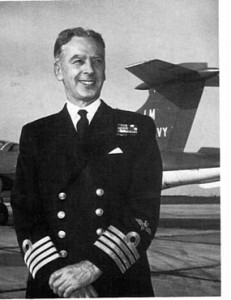 Eric ‘Winkle’ Brown studied modern languages with an emphasis on German at Edinburgh University. It was Ernst Udet who suggested to Brown that he should learn German.

In 1936 Brown’s father took him to the Olympics in Berlin, where they met Hermann Göring and Ernst Udet, both First World War fighter aces. Udet took young Brown flying in a two-seat Bucker Jungmann from Halle airfield and, after throwing the aircraft around the skies, declared that Brown had the temperament of a fighter pilot and must learn to fly.

He interrogated Göring at the Nuremberg Trials too. He said when Göring held out a hand to him to shake on parting, he was unable to take it, but instead it occurred to him to say ‘Hals- und Beinbruch’, which he described as the traditional pilots’ greeting, although that seems a narrow view.

There’s a bit about his studies in a video on an Edinburgh University site. He studied German with subsidiary French from 1937 (finishing after the war in 1947), and the Foreign Office said he should spend six months in Germany and six in France after his second year, so he went as an English assistant to Salem School in summer 1939. Of his 18 pupils, 17 died in the war and the survivor had only one leg.