A colleague recently asked how to translate Randnummer/Randzeichen/Randziffer into English, in three different contexts.

1. The usual query of inexperienced legal translators is ‘What does Rz./Rn. mean?’ The usual translation of Randnummer, Randzeichen or Randziffer is marginal number or margin number. Here’s a discussion on ProZ.

Germans just love marginal numbers, especially in legal contexts and above all in textbooks. This example is from an old copy of Peter Hay, US-Amerikanisches Recht, page 74: 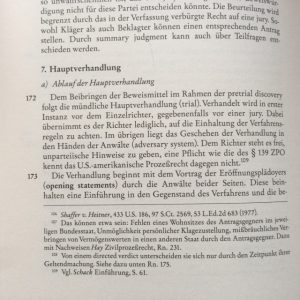 The marginal numbers here are the 172 and 173. Every single paragraph is numbered consecutively through the whole book. So you don’t need to refer to ‘7. a)’ but just to one number.

I think these are a peculiarly German thing, and there are instructions online on how to create them in Microsoft Word, for example, which is not too easy. (Randziffern in Microsoft Word). They are sometimes related to the subject matter and sometimes to the physical location, see the administrative court judgment below and the English case report practice mentioned further below.

Here’s another example of marginal numbers used in a German court case, which I don’t think is very common. The NRW Oberverwaltungsgericht uses these numbers in the right-hand margin to make it easier to refer.

2. Case reports of the CJEU use paragraphs, called para. or paras., a term which needless to say is hard to pin down when you’re looking for it (rather like indent in EU cases). So when a German version of an EU case refers to Randnummer, it is translated into English as para. The number is not in the margin, either.

3. Finally, we really do have marginal numbers/letters or marginal references in English. Some case reports have used not numbers, but letters to make it easier to quote. Google Books has Studying Law, by Simon Askey and Ian McLeod, from which I quote:

Marginal markings and neutral citations
Some series of law reports use marginal markings, in order to make it easier to provide pinpoint citations, while others do not. The original report of Henthorn v Fraser contains no such markings, while the most common system in the 20th century was to provide marginal letters, evenly spaced down each page. The system of marginal letters worked reasonably well, but it was rather cumbersome for true pinpoint citations, which had to take a form such as ‘page 234, letter D, line 3.’ More importantly, this citation would vary from one set of law reports to another, according to the page numbering of the report in question.

I remember barristers lugging cartloads of law reports to the Law Courts, where the court staff would lay out matching volumes from the court library and these would later be cited in argument. Nowadays I suppose at least for newer cases computers replace this.

More on citation in OSCOLA, whence the nice word pinpoint:

A pinpoint is a reference to a particular paragraph of a judgment or page of a report.

Avoid the use of ‘Latin gadgets’ such as supra, infra, ante, id, op cit, loc cit and contra, which are not widely understood.