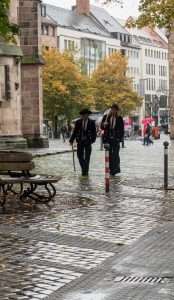 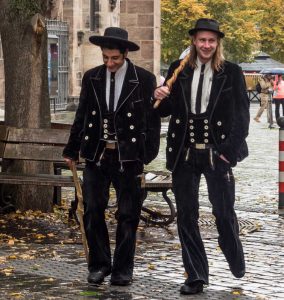 This is a late report from my visit to Germany last October. These are two journeymen. The system apparently exists in France too. I think they’re fully trained, but they then spent three years travelling, never less than 50 km from home, not allowed to drive or use public transport, have mobiles or iPads. Here’s part of a story from the Guardian:

Blacksmith Julian Coode was returning to work after a short tea break. It was a late winter afternoon and the light had faded outside his workshop in Littlebourne, Kent. He and his assistant had been discussing plans for some railings they were commissioned to make, and the forge, unusually, was quiet.

As the men returned to their craft benches, the door flew open. A young man stepped inside wearing a top hat, long black jacket, a white shirt under black corduroy dungarees with large mother-of-pearl buttons, a long twisted cane and a single earring from which hung a tiny key.

He informed his host that he was a Swiss-German blacksmith, named Sebastian Reichlin, and that he had come to stay.

Fortunately for them both, Coode had trained in German-speaking Europe and was familiar with some of the region’s more bizarre customs. He was looking at a travelling journeyman, a craftsman who had served his apprenticeship and was now following tradition by arriving unannounced, to learn from an acknowledged master and to share his hospitality.

Coode, who has four children, says: “I had to phone my wife and ask her to make up a bed in our living room.”

I have rarely seen them. It was good luck that these two walked into my photo when I was taking pictures of people with umbrellas in Nuremberg.

2 thoughts on “Journeymen in Nuremberg”